Home / News /
Some thoughts and reflections from Andy Mullaney, Author of ‘Didn’t Anyone Ever Tell You? It’s All A Game!'

Some thoughts and reflections from Andy Mullaney, Author of ‘Didn’t Anyone Ever Tell You? It’s All A Game!' 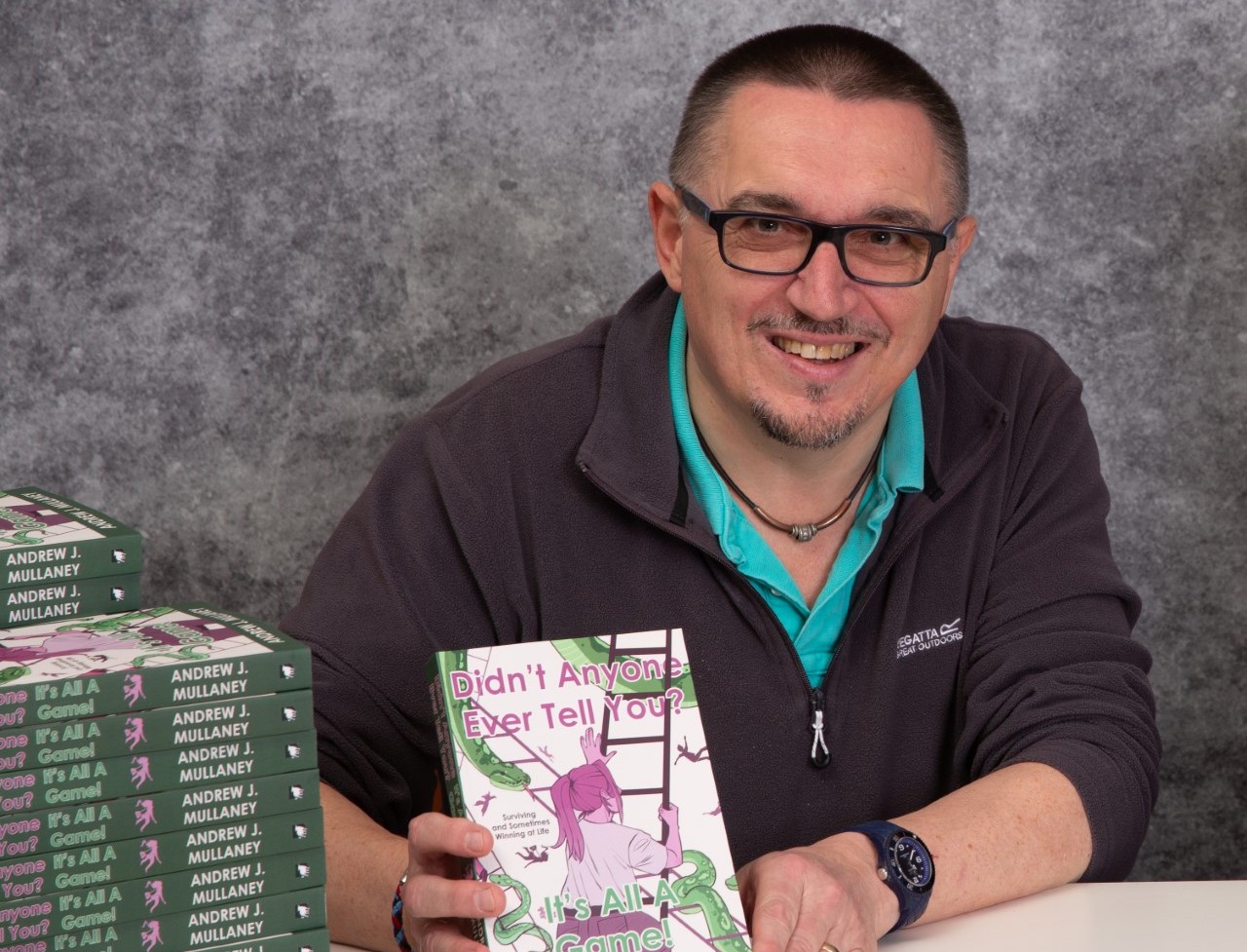 In September my debut book ‘Didn’t Anyone Ever Tell You? It’s All A Game?’ was published and a lifelong ambition to be a published author was realised. It had been over two years in the making from that first moment of clarity at 4am in August 2019. I had created something from scratch, and now the challenge was, and still is, to get people to want to buy it.

The book is aimed at those who want to be the best versions of themselves and has a subtitle of ‘surviving and sometimes winning at life.’ I use the analogy of snakes and ladders throughout, as I believe that in one way or another we are all playing games on a daily basis. Where we can differentiate ourselves as we play our own games is by playing them much more consciously than we do at present. That is a consistent message that I deliver throughout the chapters, including looking at the consequential outcomes of the actions that we take when we are faced with any given situation. We can tilt things in our own favour. The book highlights this throughout in easy to absorb chapters with bullet point summaries at the end of each one to help you find the ladders and avoid the snakes.

I was privileged to write biographies of four people that I know as part of chapter 40. This includes The Frankie Graham Story, the founder and CEO of Betknowmore. When we sat down via Zoom to discuss his life in detail, Frankie was incredibly generous with his time and honesty around his experiences. He is someone I look to as a role model and within this particular chapter, I showcase ‘ordinary people’ who have made some truly some extraordinary achievements with their lives. Frankie is certainly for me, one of those people.

Without copy and pasting the nine pages that represent his mini biography, I want to pick out a few sentences that really impacted me as the author when I came to write them after reviewing my notes from our chat. As many of you reading this will know, Frankie had a gambling addiction that saw him come close to losing almost everything  including his life, his liberty and his integrity, through to possibly the most precious of all, his family.

At the height of his addiction:

“He describes himself as weak and vulnerable – a Jekyll and Hyde type of character who people liked but Frankie himself loathed. He said he was living a lie, as he wasn’t being true to himself.”

“Frankie’s life became a self-fulfilling prophecy. The gambling and drug taking went beyond excess, the crime to fund it also became uncontrollable, and so began the final downward spiral to a place where it would have to end in one way or another.”

When talking about Bob, a role model for Frankie when he started volunteering:

“When you don’t even trust yourself, to suddenly have someone who does have trust in you, like Bob did with me, is very empowering. You never give up as an addict until you are ready, and fully self-empowered.”

Betknowmore is born and a quote from Beverley, Frankie’s Mom after he made a TV appearance:

“Straight after the filming ended, Frankie got a call from his mom, who had been watching, and she simply said, “Well done.” With those words, and in that moment, he knew that the trust and belief in him was back. She believed he would do it. He is finally walking the long path to redemption but no longer doing it alone. Now he has his greatest friend and most cherished supporter, his mom, Beverley, walking alongside him and cheering him on.”

Writing my book has been extremely cathartic and has taken me on a personal journey of discovery. I believe that I understand more of who I am, why I am the person that I am and most surprisingly of all, why my parents made some of the decisions that they did for me when I was younger. I have a better relationship with them now in my mind than I ever did when they were alive (they both sadly passed away over 25 years ago), and that again has been one of the ways that my own writing has helped me to move forward. I never set out to write an autobiography and the book itself is not autobiographical, but it does have descriptive scenes and pictures from my life that help to make some of the chapters take on a new meaning.

I’ve had some great comments and reviews from those who have read it since publication and the two below really do sum up for me what I was seeking to achieve. I am desperate to help to create a better world and to leave a legacy that ensures those that follow can pick up the bat on that my generation passes to them, knowing that they have the framework, the tools and the skills to take our species and our planet to the next stages of evolution. From where we are now this is a difficult ambition to realise but we must keep asking ourselves difficult questions and trying different techniques to help us all find more compassion, kindness and empathy.

'Didn't anyone tell you . . ' is an easy read book but it is packed with some very deep and penetrating truths to provide guidance and inspiration for living and succeeding well. The fifty chapters cover a wide range of life events and and principles.

Some people will read it from beginning to end but I could not resist picking out chapters to dive into and then seek to apply. I did not agree with everything but I found everything thought provoking and helpful. For me it provides a great framework for articulating and navigating some of the most challenging aspects of modern living. It is not just about business and work it is about much more.

I absolutely love this book...it’s like having a mentor in a book that you can turn to when needed. The endless chapters which seem to cover every topic or challenge you may face professionally are excellent and well thought out. I also personally love the stories that are featured covering the lives of some incredible people doing amazing and much needed work in society. Andy provides practical tips whilst also drawing on his own personal experiences of navigating this journey called life in a honest and humbling way....I would definitely recommend to any young professionals and experienced professionals.

For anyone reading this who wants to know more, then my book is available via all major retailers, both in physical and ebook format. 25% of everything that I make will go towards charities of those people that I feature and naturally Betknowmore is one of those. Here is the link to the publishers site which gives you more of a précis.

Finally, anyone who wants to get in touch directly with me then please do so via https://www.andrewjmullaney.co.uk/ or LinkedIn. It will be great to hear from you.