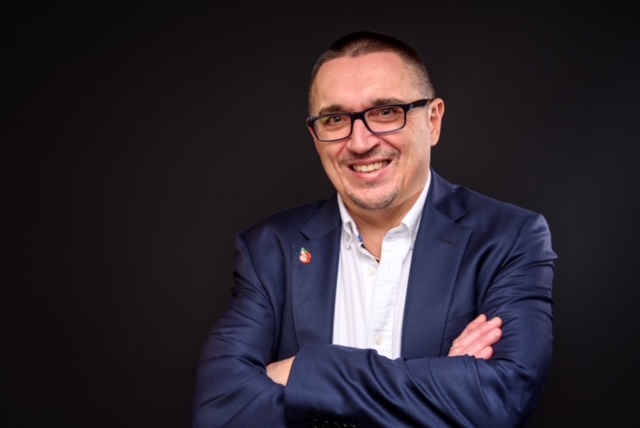 'I met Andy at a Business in the Community (BITC) event, where I presented to a team of Lloyds Bank Business Connectors in 2016. Andy introduced himself afterwards and I immediately sensed a warm, genuine individual, and so it proved. We remained in touch, Andy kindly invited me to a social enterprise event in his home town of Dudley, where he was using his extensive experience, skills and passion to generate local connections and business opportunties. Amazing, selfless work.

I was proud and honoured when invited by Andy to contribute to 'Didn't Anyone Ever Tell You? It's All A Game' and I am delighted he has agreed to tell us more about his own journey and motivation to become an author. Thank you Andy!'

‍'I truly believe that the greatest achievement we can make in this life is to survive, to be the very best version of ourselves that we can be, while at the same time attempting to make the world a better place in some way'.

‍Like all addicts, I was in total denial. I could stop anytime I wanted – but it was my choice not to. Never mind the effects on my health, my finances, my family. Never mind the veil of secrecy that occasionally surrounded my habit and the fact that I sought out like-minded others to indulge with. It was just being sociable after all. I was young and in control ... or so I thought.

When the pressure of work hit hard, then family illness and bereavement occured, I turned to my addiction even more to give me reassurance, comfort and an excuse to be away from whatever difficult situation I was facing at that time. I came to rely on it as a friend, a convenient excuse and I really didn’t mind what others thought. I just couldn't bring myself to admit how bad it was or tell some of those who I loved exactly what I did. They would be the most disgusted, offering never ending judgement at my lack of perfection and vulnerability. It was a sign of weakness and to them, couldn’t be weak.

It took a trip to the doctors for me to ‘wake up.’ My blood pressure was sky high, eczema was really becoming obvious on my face, and the black bags under my eyes were heavy from the lack of sleep and worry. I knew something had to change – and I was ready for it.

You see, I was a smoker.

The doctor made me stop there and then. “You keep on like this and you’ll die. You won’t see your kids grow up and you will never be the person you really can be. You are addicted to nicotine.”

I was randomly carbon tested every few weeks by the doctor with a ‘one strike and you’re out” rule. That meant not only me, but also my family would be asked to leave the practice.

Sometimes I even went a bought a packet of fags just to throw them away.

The fear of the doctor, of dying young, not seeing my kids grow up and my own self respect made me stop smoking, and in time it got better. Don’t get me wrong, I loved smoking and even now, 17 years on. I know that I would enjoy one if I had one. However, that would break a sacred oath I have with my GP, myself and my family never to light up again.

It was the use of the word ‘addiction’ in the surgery that frightened me the most. I suddenly realised that I was an addict and have been conscious of that word ever since. I’d never actually spoken to anyone else who confessed to being an addict until one day in London, when I met the founder of Betknowmore, Frankie Graham. This was one of many days in 2015 and 2016 that changed my life, and changed it for the better.

‍Having spent all of my working life (35 years) with Lloyds Bank, I was seconded for a year to Business in the Community (BITC) to be a Business Connector, helping to link the private, third and public sectors together in the Dudley Borough where I live. Before forging these links, it was essential for me to understand just what the third sector was and Frankie became a significant part of my induction programme.

Frankie’s presentation and delivery hit me hard as he described in graphic detail the harm and hurt he had caused, not just to him but to those he loved, through his gambling addiction Without specifically explaining what the third sector was, Frankie outlined how many charities, not for profit organisations and social enterprises are formed and the role that they play in our communities. Some people in the audience knew this, but many of us had spent our careers blinkered and blinded by the need to feed the corporate machines, making the rich even richer I guess.

I reflected on my own former addiction to ‘those little white cancer sticks’, as the doctor referred to them whenever I saw him. I got it. I understood why the ‘need’ switch can turn in your head and go from off to on so quickly. It’s so complex and once it is on, then moving it back is far from easy. It’s not like turning off a light. It should never carry judgement by the many, but only ever drive compassion, practicality and understanding wherever possible, in the help that follows to change that switch back. We are all, I believe, only a heartbeat away from making the choice to push the figurative switch in our heads to ‘on’.

‍Surviving the game of life

‍I’ve had the privilege of writing a pen portrait of Frankie and several other remarkable people as part of my book “Didn’t Anyone Ever Tell You? It’s All A Game.” The subtitle is “Surviving and sometimes winning at life.” Those early days with BITC made me realise that we need to go through life in full consciousness. We can’t just keep living our lives without truly appreciating what we have, where we are going and what is happening around us. One of the people I mentor was a test reader for me and she described the book as being ‘like a reference manual that you can pull down off the shelf to cover most situations life can throw at you. It may not have the specific answer that you seek but it will help to take you towards the right solution.’

I do fear that many people today lack access to those who are sounding boards, voices of reason, confidential counsellors, role models and mentors, which is why I have tried to make the book easy to read and it will hopefully help to set a good direction for all. I truly believe that the greatest achievement we can make in this life is to survive, to be the very best version of ourselves that we can be, while at the same time attempting to make the world a better place in some way. Our legacy surely must be one of making things better for those that follow.

There are so many dangers out there too, particularly for the younger members of society, that are almost being sanitised by the media. For example, the exposure to gambling and social media without any form of warning besides very limited messaging fills me with horror. Do we not know the problems that will occur both now and further down the line in society unless we act and act now? So many also seem hellbent on telling others what their success should look like and what success can mean. We are all individuals on this planet so that, for me, means there should be several billion definitions of success. For some people, just getting out of bed that day is a massive achievement and an example of their own personal success.

‍A journey of self discovery

‍Writing my book was a form of calling. I woke up at 4am one morning and knew that I had to write down what I knew whilst trying to show others how to make the whole process of living that much easier. The whole experience has been cathartic, exhilarating, emotional, frustrating and also a journey of self discovery. I believe I finally know who I am and, for the first time in my 57 years, feel truly comfortable in my own skin. I would encourage everyone to go through this when they feel able, whether it’s just writing a few words on a page, right through to a complete book. It is so powerful and remember that the blank page in front of you has no opinions or judgements. It is youand your own thoughts. It is therapy and carries great healing when done honestly and with authenticity, not only for yourself but for others too.

My book should be published later this Summer and can be found via Troubador Publishing’s website Of any income I make from the book, 25% will go towards the causes of those I feature. One of which is Betknowmore, so I sincerely hope that I have some sales and can send a cheque Frankie’s way. I’m also very active on LinkedIn and you can find out more about me here.

‍As someone who has always had an ambition to be a published author, I am now at the scary point where shortly my work will be out there for all to assess. No doubt some will struggle with some of the contents and concepts. However, I feel like I have something to say and there comes a point in your life when you want to make yourself heard. This is my time and if my book changes the life of one person for the better then it has all been worth it.

More news
The Betknowmore Podcast Launch
Some thoughts and reflections from Andy Mullaney, Author of ‘Didn’t Anyone Ever Tell You? It’s All A Game!'
Betknowmore is growing and so is our Board of Trustees!
Safer Gambling Week and harm prevention
Awards for All - The National Lottery Community Fund
Mark Saggers joins Betknowmore UK
Dan speaks about his experience of Gambling Harms and his journey to recovery.
Overcoming my addiction, meeting Frankie Graham and using writing as therapy

What services we
currently offer

Learn more about the services we offer at Betknowmore UK, and how to access them.